Life of a German Emigrant Family

In 1832, the Krekel family settled in the far southwestern corner of St. Charles County, in the Femme Osage Township, next to the border of Warren County. This community was 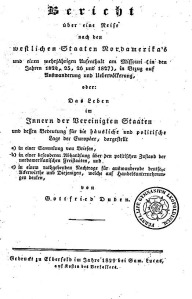 known as Dutzow, where a village had been founded by the “Baron” Johann Wilhelm Bock which was named after his former estate in Germany. Bock had established his village on the southern edge of the farm of Gottfried Duden, an author who had published a book called “A Report on a Journey to the Western States of North America” in 1829. Duden’s book was the impetus for a huge wave of migration from Germany to Missouri in the decade of the 1830s.

“Before leaving Europe my father had decided to settle in this neighborhood. A criminal Judge named Duden with whom my father was personally acquainted had come to America several years previous and wrote such favorable letters to Europe that my [father] thought well of this country” In sight of our home in Germany was the home of Carl Deus. Carl’s father was a brewer, distiller and coal merchant. The family was quite wealthy and of high social class. In the year 1832 when Carl’s father heard that our family intended going to America he asked my father to wait until ’34 when there was a colony coming over, but my father was of a disposition not inclined to subject himself to another’s dictation so came alone with his family. The Deus family consisted of himself and wife and three daughters…two sons…Peter and Carl. The family settled within a mile of our home and we children became playmates and later good friends. Many a Sunday afternoon did my sister Kathryn and myself spend with them playing “Hopfen Suchen” (Hide and Seek).”

In the summer of 1834, founders of the Giessen Emigration Society, Friedrich Muench

and Paul Follenius would settle their families in the Dutzow community as well, near the northern border of Gottfried Duden’s farm. Members of the Society would also settle in the St. Paul, Cottleville, and Hamburg communities. Nicholas Krekel would spend time on Friedrich Muench’s farm, working alongside other young men who had also recently immigrated.

constitution. On account of the unlimited hospitality of people in those days and the very limited accommodations of the home at that time … [I] got the itch. I cannot describe the suffering I endured from it. After that I had the typhoid fever which left me very weak and blind for eleven months. During those months sister Kathryn dear faithful girl was my constant companion. Near our house was a ten acre field we had cleared during our first winter there. There were many stumps in it. I was put to plough it…”

“During the high water of June 1844 I was working for Steven Hancock who lived in Hancocks bottom in a double log house later owned by the Kunsels [Kuenzel] next to Anton Reuther’s farm. Before the water was at the highest point the stock and horses were in a pasture that was somewhat higher … than most of the farm. One morning when we got up we found the pasture under water the stock in the pasture were up to there [sic] neck in the water. Myself and Mr. Hancock’s son Dan rode in and drove them out, the fences at that time all made of rails were raised in the water and moving slowly up and down. As long as the “top rail” is still there it is safe but as soon as it is gone and the weight is lifted the fence will raise again and another rail go off, so in a short time the fence will be gone. We took the stock to a higher place near the river bank. Mr. Hancock went to Washington Mo to get one of the boats that would come down the river to take us to Washington. Five boats came by and all passed and gave no attention to our signals of distress. The water was up to our knees and young Hancock cryed [sic] fearing we would drown. Towards evening a boat came down the river named Wapella. It took us and all the stock to the other side.”

The flood of 1844 filled the river bottoms of the Missouri River where hundreds of German families had established homes. Today this is part of Missouri’s “German Heritage Corridor” as established by the Missouri Legislature on July 1, 2016.

According to the History of St. Charles, Warren and Montgomery Counties Nicholas “was reared in this county and remained at home on the farm with his father until he was nearly approaching majority. He then went to St. Louis and was connected with the manufacture of shot at the shot-tower in that city, the first one established west of the Alleghenies, for some seven years. Meanwhile, however, the Mexican War having broken out, he enlisted for the service of his country under Gen. Price and served with conspicuous courage and fidelity until the triumphant close of that struggle. In 1856, still a young man, he located at O’Fallon, Mo., and built the first house that reared aloft its walls at this place.”

“Wilhelmina Moritz and Nicholas Krekel were married August 15, 1857 at St. Louis coming to O’Fallon Missouri shortly after, where I [Nicholas] had built a home, having come there on August 6, 1856 … Wilhelmina Louise Moritz was the oldest child and daughter of Casper and Sophie Moritz of Bielefeld, Westfalen Germany. She was born July 17, 1838 and came to America … by way of New Orleans. Her father and brother came … sooner by way of New York where Mrs. Moritz had a brother living at Buffalo….” 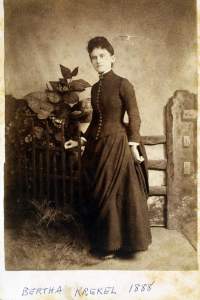 Krekel. He was the founder of O’Fallon, Missouri, born in Germany on August 30, 1825 and emigrated with his family to America in 1832. The story was shared in his final years just shortly before his death. The journal has been graciously shared with me by a descendant, John Griesenauer. The author extends her utmost appreciation for allowing her to share this wonderful piece of family history. The home is the Nicholas Krekel home on Main Street of O’Fallon being renovated by Jason and Jessica Orf to be opened soon in October of 2017. Next…The Krekel’s in the Civil War. For more on the Dutzow community and the Giessen Emigration Society see the blog Mo-Germans.com as well.  See also earlier post Coming to America