St. Charles and attended the  St. Charles College where he studied law. He worked as a surveyor and became a Justice of the Peace as well. In 1844 he graduated the bar and opened his law office. Krekel became the St. Charles County and city attorney from 1846 to 1850. He was elected to the Missouri House of Representatives in 1852. In 1855, he purchased 320 acres of land, and platted the town of O’Fallon. There his brother Nicholas Krekel, built the first house, and established the town’s Post Office. They established O’Fallon as a town on the Wabash Railroad, with Nicholas the agent.

Arnold Krekel was editor of the St. Charles German newspaper, Der Demokrat from 1850 until 1864, and when the Civil War began, Krekel served in the Union Army, as Lt. Colonel of a regiment of Missouri volunteers. When the Civil War began, Missouri’s plans for gradual emancipation infuriated the Radical Republicans, who wanted slavery abolished immediately. They took their grievances to Lincoln, who refused to take sides in Missouri’s politics, which infuriated them even more. Provisional Governor Gamble offered to resign, but the First Constitutional Convention would not accept it. Gamble died in office on 31 January 1864. Missouri’s radicals arranged for elections and for a new Constitutional Convention in November 1864, where they elected Thomas C. Fletcher Missouri governor.

Arnold Krekel, a Democrat, was elected President of the new Constitutional Convention that met in the Mercantile Library in St. Louis on January 6, 1865. On January 11, 1865 the convention, by a 60 to 4 vote, abolished slavery in the state with no compensation for slave owners. A month later the convention also adopted the 13th Amendment to the United States Constitution to abolish slavery throughout the U.S..

On March 6, 1865, Krekel was nominated by President Lincoln to the U.S. District Court for the Western District of Missouri, and confirmed on March 9, 1865. Krekel later taught law at the University of Missouri Law School in Columbia from 1872 to 1875, and continued to as a Judge for the Court until his retirement on June 9, 1888. 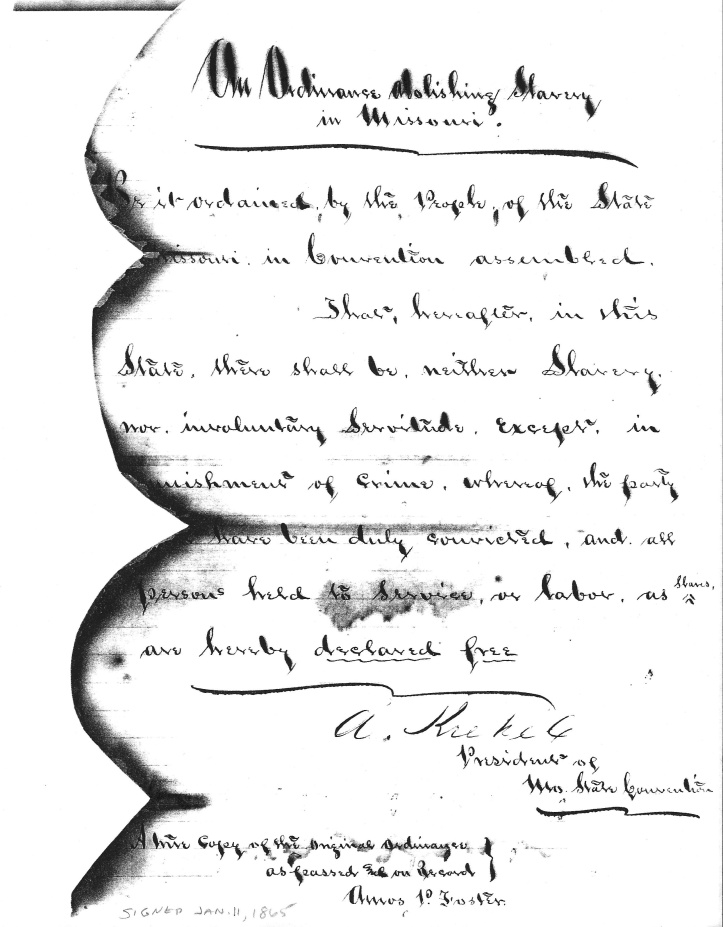 Recent posts on this page…